Hadrian Lin is a GBStudio developer who released “The Year After” in August of 2020. He took some time to answer a few questions about his game, including some of the unique features the game implements with its audio and color overlays.

Can you tell us a bit about yourself?

I am interested in art and programming. I do both for work and as a hobby. I’m a mediocre programmer and my superpower is brute-forcing things until they work.

How did you find out about GBStudio? Is The Year After the first game you made?

The Year After was the first game I made with it. I was searching for something that could make JRPG-style games. My memory is foggy, I may have Googled for something like “Zelda game-maker” and found GB Studio. The slick interface and ease-of-use was a huge draw for me but the technical limitations of the Gameboy format turned me off at the time and I decided not to use it. As time passed I saw the limitations in a new light and embraced them.

What influenced you in the making of The Year After?

I’ve had the idea of someone walking through time rattling around in my brain for years. Originally, I planned to make a game with a literal time-travel story in which the player cannot prevent a tragedy from striking a family. The environmental storytelling was inspired by games like Outer Wilds or Edith Finch. Perhaps also a bit by Wes Anderson films and how they use personal objects to reflect the personality of the characters. The game Florence by Mountains studio inspired me to use game mechanics not to generate challenge/fun but to evoke emotion. So I tried to use some simple movement restrictions to evoke emotion near the end of the game.

Your game has some unique features with the colour and sound implementation. Can you tell us briefly why you decided to include that and how you accomplished this?

I played some low-res bitsy games that added realistic ambient sound. The mashup of low-res graphics with high-def sound did something wonderful. Low-res art allows the player to project a lot of personal emotion into the characters and environment, like how when reading a book your imagination fills in much of the missing detail. Yet the high def sounds make it feel grounded, like you are right there in the environment. It also can evoke very specific moods. It was a perfect pairing of old and new-school and I wanted to try for that myself.

For the technical explanation how it was done: I dug around the internet to see if I could find a way to access Gameboy memory with Javascript in the web browser and experimented with code. I came pretty close to succeeding but missed one small piece of the puzzle. Ben Grabau, the person who made a multiplayer GB Studio demo game, helped me find that last piece. After I had that, I wrote up a system using Howler.js that allowed me to play and layer audio files. Javascript that repeatedly checks the Gameboy memory for changes is what triggers the sounds.

As for color, I originally didn’t intend to have any at all in the game but since I already had the code to trigger sound, it was a small step to use it to trigger color overlays. It also felt like some of the seasons were not distinct enough, so adding color differentiated them.

Tell us about the physical production of the carts for the game. What is the process like?

I have just started the process so it’s hard to say too much about it yet. A certain fellow known for running a successful kickstarter for the “Warp Coin Catastrophe” GB Studio game carts gave me some much good advice. (Note: Hadrian is referring to the interviewer here.)

At this point I have ordered 15 carts from a supplier in China and they have arrived in the mail. I am in the process of flashing making test ROMS. If everything is good, I will order a larger batch.

I am still working on the chiptune music and experimenting with an interface to hook the audio-jack of a Gameboy up to a PC to have high-def sound. I may die on this hill.

I aim to have the finalized carts in some form, ready to mail out to those who have pre-purchased by Spring/Summer 2021.

How do you feel about the game now that it’s out? Do you have any hopes for it?

I’m happy many people have played and enjoyed it. Seeing people catch the little details and feel the emotions I tried to evoke (even some that were hard to articulate or fully understand myself) has been immensely satisfying. I hope more people play and enjoy it. 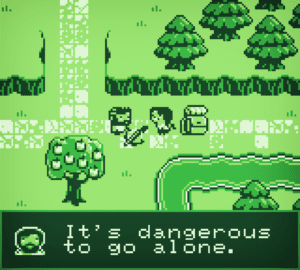 What’s next for you? Any plans coming up?

To clear the palate, I plan to make one or two throwaway games. No expectations, no pressure. Just experimentation. I felt a bit anxious while making The Year After, hoping to make something meaningful to me and others. After the experiments I’ll make a sci-fi game about artificial intelligence, using GB Studio or RPG Maker. I’ll continue with the environmental storytelling approach, but lean more heavily into evoking emotion through mechanics.

Anything advice for our readers?

Games take forever to make. I thought The Year After would take about 3 months, working on and off, to finish. It ended up taking around 10 months. There were times when I wanted to smash my keyboard but overall it’s been an incredible experience. I’m thankful for this beautiful piece of software called GB Studio. 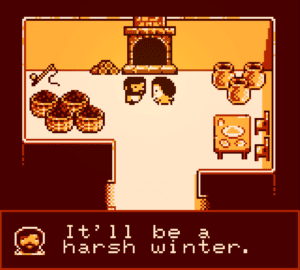 Our spotlight on “The Year After” is coming soon. You can play the game for yourself on Hadrian’s Itch Page. This game works best with a Chrome Browser and using headphones to experience the unique audio mechanics. Hadrian is offering pre-purchase of carts there for $20, or a fun pixel portrait of you when you buy the game for $9 or more. You can also follow Hadrian on his Twitter Account.

proximitysound.com
Liked it? Take a second to support GB Studio Central on Patreon!